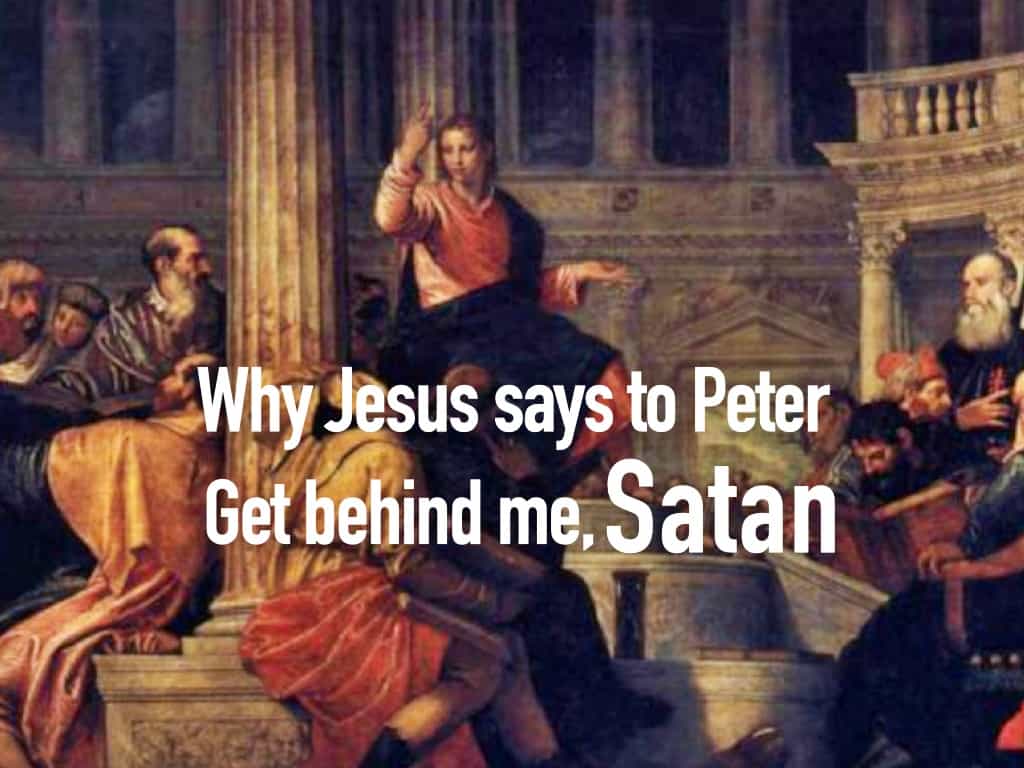 It’s an interesting passage wherein Jesus calls his friend Peter: Satan. Peter, a star student, had given the correct answer – identified Jesus as Christ or the Messiah. But Peter tempts Jesus not to walk on the way, God wanted Jesus to walk. Jesus was revealing to march on the path of suffering, rejection, death, and resurrection. We are talking about Mark 8:27-38.

It was Jesus’ easy question to the disciples: Who do people say that I am? Jesus’ disciples report the buzz they hear among the crowd. Some say you are John the Baptist, others Elijah, and still others, one of the prophets. And why not? Jesus’ ministry of preaching, teaching, and healing resembles that of the great prophets of Israel. The disciples gave sensible answers. Jesus’ ministry evoked the legacy of the great prophets calling people to repentance, healing the sick, and serving meals in the wilderness.

How does Peter come out with the perfect answer?

Then Jesus asks the disciples a pointed question: who do you say that I am? It was Peter who spoke before the others and said: You are the Christ. The title Messiah in Hebrew or Christ in Greek was associated with an anointed king, a royal figure from the linage of David. The Messiah was expected to come and free Israel from the Gentile oppressors, purify people and restore Israel’s glory.

Peter gave the correct answer. But it is not logical.

Remember, Jesus made no claims to be a Messiah or showed signs of overthrowing the Romans. Perhaps, Peter is hoping that Jesus will go to Jerusalem and assume the messianic role. Peter thinks that Jesus will fit in the widespread expectation – a military savior who will come and overthrow the Romans. Peter uses technically accurate language but cannot see what that means.

Do you want to know about the title? You are the Christ.

Mark began this Gospel by saying: the beginning of the Good News of Jesus Christ, the Son of God – establishing that Jesus was both Christ and Son of God. When Peter says you are the Christ, it is a parallel statement – meaning anointed. The Jews anoint three classes of people: priests, prophets, and kings. Jesus was all three of them.

Before Jesus’ death, the high priest will ask: Are you the Christ? And Jesus answered I am (Mark 14:61-62). Finally, the centurion said this is truly God’s Son (Mark 15:39). And Jesus had to teach the disciples that the Son of Man must suffer, be rejected by elders, the chief priest and the scribes, and be killed and after three days rise again. The disciples did not expect his type of a suffering Messiah.

Jesus spoke about a Messiah who will be rejected, who will suffer and be put to death. Now, it is Peter who rebukes Jesus in private. Imagine Peter telling Jesus – no, this is not the way things should be going. A Messiah is supposed to conquer the Romans, not get killed by them. Jesus’ identity involves his eventual death and resurrection.

Why Peter’s temptation is greater than the opponents?

Scholars think of the encounter between Peter and Jesus as Mark’s version of the temptation story – to give up the cross. And therefore, Jesus orders Peter, by saying these words: Get behind me, Satan. Peter’s temptation is more dangerous than the ones mentioned in Matthew 4. Because Peter is a disciple and a friend rather than an opponent. Peter is a well-intentioned man rather than the personification of evil. We are likely to listen to a friend’s voice than that of a known evildoer.

Why did Jesus call Peter Satan?

Jesus responds harshly to Peter: Get behind me, Satan, for you are setting your mind not on divine things but on human things (Mark 8:33). Jesus is God, and we cannot tame him or make him do things according to our expectations. Our response, like Peter’s, is in the light of our expectations. We want a savior who will solve every problem for us. Jesus’ mind is different.

Jesus’ words, “Get behind me, Satan remind us about Jesus’ first words to Peter. When Jesus called Peter, he said to Peter: come after me. Now Jesus orders Peter to take his proper place as a disciple – coming after, following rather than leading Jesus.

Jesus, along with his disciples, is “on the way” to Jerusalem. ‘On the way’ is vital in Mark’s Gospel. Because John the Baptist came to prepare the way of the Lord. Peter, like Satan, is blocking Jesus on the way to fulfill God’s plan of salvation. And therefore, Jesus commanded, Get behind me, Satan.

What is Jesus’ expectation?

Jesus expects disciples to follow him on the path of suffering and death. Jesus says: if any wants to become my follower, let them deny themselves and take up their cross and follow me. For those who want to save their life will lose it, and those who lose their life for my sake, and for the sake of the Gospel, will save it (Mark 8:34-35).

What does Jesus mean by saying take up your cross?

Jesus is not talking about suffering that is part of the broken world. Jesus, in his ministry, alleviated the suffering of those whom he healed. Neither Jesus is inviting to seek out suffering or martyrdom. Suffering itself is not redemptive. Jesus did not seek it, but he foresaw that it would be the inevitable outcome of his mission. It means a willingness to suffer as a consequence of following Jesus faithfully. It means putting Jesus’ priorities ahead of our comfort zone – a willingness to lose our lives for others to make known God’s love to them.

Jesus’ expectation is contrary to our instinct of self-preservation. Like the disciples, we want to save our life. Peter, the star student who gave the correct answer – ran away and also denied knowing Jesus three times.

Jesus is asking you: Who do you say I am?

And you identify correctly like Peter: You are the Christ. But then you are challenged not to tempt Jesus or tame him according to the expectation of the world around you. Stay away from tempting God, be a disciple and not God’s advisor.

Related Posts
Where does evil come from? Jesus’ Answer
When did Jesus Say Shut Up?
Mary Visits Elizabeth: What Did You Miss Out?