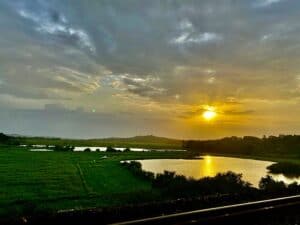 You have heard the narrative about Mary’s Visit to Elizabeth. But what did you Miss Out? (Luke 1:39-56). There are many things that we tend to skip as we recall Mary’s visit to Elizabeth. Is Mary running away to take shelter? Rather than helping? Is Elizabeth Mary’s cousin?

How does Mary Come to Know Elizabeth’s pregnancy?

Mary visits after learning about the pregnancy of Elizabeth from the Angel. There is an intimate conversation between Mary and Elizabeth. The conversation reveals Jesus is greater than John. It shows God is at work overthrowing structures and expectations. The spotlight is on Mary and Elizabeth, two lowly and shamed women God has chosen to transform the world.

Is Mary running away to take shelter?

The Gospel speaks about Mary going to visit Elizabeth in haste. What was the hurry? Mary said yes to the announcement of the Angel to be the Mother of the Lord. But there are implications for her response in a patriarchal society. A young unmarried girl found pregnant would be a cause of social shame. Such a girl would better hide indoors rather than take a journey to another town. Or did she travel to her relative to take shelter from the society that would ostracize her?

But the scripture states that Mary visited the home of Zechariah and Elizabeth – perhaps because Elizabeth’s pregnancy proceeded Mary’s by six months – and again, perhaps Mary would help the newborn. But it can also be a sign of respect shown by a younger woman to her elder.

Luke identifies Elizabeth as Mary’s relative. We don’t know the exact relationship. We usually think John is Jesus’ cousin based on Luke 1:36. But the scripture is not giving us details of relationship status. Think about it, given the age difference between Mary and Elizabeth; it appears Elizabeth is a generation older, perhaps Mary’s aunt.

Why would Elizabeth express honor at Mary’s Visit?

In the cultural context, an older woman would receive the honor. Mary is young, so she is the one the more senior people would expect deference. In addition, Mary is an unmarried pregnant girl who visits Elizabeth perhaps to reduce her visibility of a shameful pregnancy – but the Gospel does not talk about this.

Why is Mary called blessed among women?

Is Mary blessed among women because of her status as the Mother of the Lord? Yes. Mary is blessed because of what is there in her womb – referring to Jesus. Therefore, the present and the future generation will call Mary blessed, speaking well of her and her child.

Mary is blessed because she believed.

Mary is blessed because she believed there would be a fulfillment of what was spoken to her by the Lord. The word used here is the same as what Jesus used to bless people in the beatitudes. We can translate Elizabeth’s words as “Blessed is she who believed.” Mary is blessed despite all expectations; her social status is reversed. She will be honored rather than shamed. She believed that God could do what God promised to do. Blessing is based on a right relationship with God.

Elizabeth contrasts Mary’s trust in God’s power and promises with her husband Zachariah’s skeptical questioning. Zechariah asked the Angel for proof, Mary asked for an explanation of what was going to happen. Zechariah, a religious professional, doubted, while Mary, a peasant girl, believed and trusted God. Elizabeth celebrates Mary’s willingness to say yes to God.

Why was Elizabeth a better person to understand Mary’s situation?

Older women would judge, shame, and even ostracize unmarried pregnant women like Mary. But Elizabeth knows the cost of being shamed and excluded for being barren. In the ancient world, a woman’s primary purpose in life was to bear children. So elderly infertile wife would endure social scorn for life. By treating Mary with honor, she overturns the social expectations. Even welcoming Mary into her home is a pattern of social reversal, as Elizabeth’s neighbors are expected to reject her for sheltering an unmarried pregnant woman. But Mary’s pregnancy brought great joy and honor for Elizabeth. It was a display of the same inclusive love as Jesus, welcoming prostitutes and sinners.

It’s an invitation to remain open to God’s ways in the world, sometimes contrary to the social expectation, even overturning the unhealthy structures that shame others. We are called to support and wait in the hope for God to fulfill his promises.

The 20th Sunday in Ordinary Time (August 15, 2021) coincides with the feast of the Assumption of Mary into heaven. Luke 1:39-56 talks about the beginning of Mary’s journey. The assumption is almost the culmination of  Mary’s trust in God. You are invited to be part of the adventurous journey of faith, trusting God will fulfill His promises in your life and in the world.

Related Posts
When did Jesus Say Shut Up?
What does the Crowd Want to Know from Jesus?
Why Do Catholics Wear Scapulars?