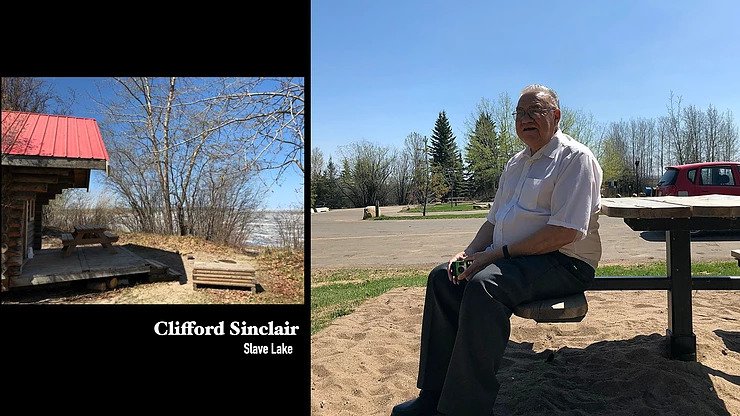 Clifford Anthony Sinclair, a parishioner at St. James Celestine Church Slave Lake, bumps into a new priest to Canada. And almost as a ritual, invites the priest for a coffee at McDonald’s.

As a new priest to the Archdiocese of Grouard McLennan, I was in Slave Lake to familiarize myself with the North American driving culture. Clifford interacts with the priests like me, from Africa and Asia. He usually has a polaroid camera, shoots a photo and hands it over to the new priest.

Clifford met up with around eight priests in the past two and a half years. Each priest must have stayed in Slave Lake for an average of fifteen days. Once the new priest is licensed to drive a four-wheeler in Canada, he is posted in a parish.

Clifford is known to invite people new to Slave Lake – irrespective of religion or nationality – for coffee at McDonald’s.

Apart from voluntarily introducing the new priests to native culture, Clifford proudly shares his experience of joining the seminary to become a priest. Although he quit the priestly studies, Clifford still shares an affinity with priests.

Eighty-year-old Clifford identifies with the Métis communities. Clifford loves wearing red or white shirts – red associated with Métis culture. The fur trade brought the Sinclairs into the Old Town of Slave Lake in 1817. Clifford spends time at the Slave Lake Native Friendship Centre, which his relatives helped to start in the 1970s.

Clifford promotes “No Drinking” culture among the native communities – even his eightieth birthday celebration included fun, food, and dance but no alcohol. Clifford chose to quit drinking liquor. “Lead by example,” Clifford says.