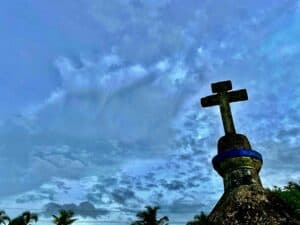 You are probably wondering when did Jesus say the words shut up? And you want to know why Jesus said those words. What was happening at the time when Jesus said shut up? What made Jesus say it?

We are talking about John 6:41-51. It is a conflict situation because Jesus says: I am the bread of life. The crowd engages with Jesus – almost showing off their knowledge about Jesus’ family, about Moses and manna in the desert. But for the Gospel writer John, the crowd is the Jewish authorities – who were Jesus’ primary opponents. Interestingly, John’s Gospel does not start talking about the childhood stories of Jesus. But it starts by stating: In the beginning was the Word – meaning Jesus was with God from the beginning of time.

Jesus said shut up when people misunderstood who he really is.

Why is the Crowd Grumbling?

The words ‘grumbled or murmured or complained’ – refer to the Israelites who complained about God. The crowd grumbled about Jesus’ apparent failure to prove that he came from God. The reference of manna is compared to the people complaining about Jesus who is the bread of life.

Jesus’ critics manifested the same lack of faith as the critics of Moses (God) many centuries ago. Even today, people fall into the same trap of complaining when God fails to meet their expectations.

They want to fit Jesus into their frame of expectations. The bread is equivalent to manna in the desert. The miracle of feeding the crowd is similar to the food that filled their ancestors. They cannot think beyond this context. Jesus has to shut them up to provide a different context. Jesus says I am the living bread; it’s not about food. It is not something that has already happened, but it is about something that will happen.

Jesus is the Center of Faith

That’s the epic center where people are drawn into. Jesus’ negative words: No one is able to come to me unless drawn by my Father. The crowd is resisting. The word ‘drawn to’ is translated as dragged. No one can come to Jesus without the Father’s pull.

When Jesus talks about coming to me, Jesus is quoting Isaiah 54:13, which says the same words positively: All who heard from the Father and learned from what they heard will come to me. It is clear whoever learns from the Father will result in coming to Jesus.

The best way to understand the words “drawn by my father” is like fishing nets hauled into a boat. There is resistance on the part of the fish – God gives people space to resist – but finally, it will be futile to resist the pull of the Father. It’s a matter of faith. Faith is not a simple choice made by humans. It is the activity of the Father drawing people to Jesus.

Faith is not a simple choice made by humans. It is the activity of the Father drawing people to Jesus.

Where does it all end?

In John 6:35, Jesus says, “I am the bread of life. He who comes to me will not be hungry, and he who believes in me will never be thirsty.” People misunderstood it. Jesus shuns them for their lack of belief. People wanted a sign that validated Jesus’ claim. Jesus corrects their understanding that it is not Moses who gave you manna but God, my Father.

My Father gives the true bread from heaven, and you will not die like your ancestors who ate the manna in the desert. The promise to the one who believes in Jesus will have eternal sustenance – eternal life – the reward for belief is eternal life.

Jesus ends by saying in John chapter 6 verse 51 – I am the living bread which came down out of heaven – if anyone eats of this bread will live forever. It’s about the lack of faith that results in death. ‘To eat of this bread’ is a metaphor for once and for all acceptance of Christ.

Related Posts
Mary Visits Elizabeth: What Did You Miss Out?
What does the Crowd Want to Know from Jesus?
Bizarre Things about St. Anthony of Padua