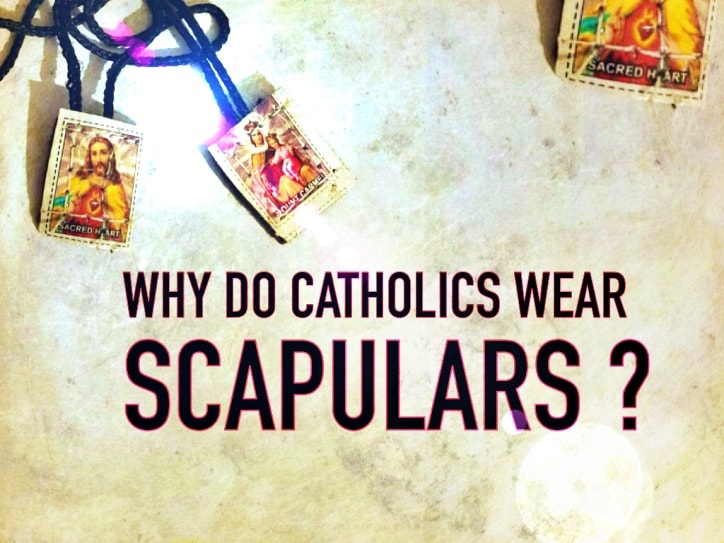 Wearing a brown scapular is a popular devotion among Catholics. But what is a scapular, and where did it come from? How did the long cloth piece become a small token sign around one’s neck? What a scapular is NOT?

Too many questions? I know! But if you have more, please feel free and let me know in the comments below. You may have faith testimonies about the scapular as a faith symbol; share it with others.

What is a Scapular?

You must have noticed Catholics wearing a brownish rectangular piece of cloth attached by a cotton cord around their neck. It’s easy to identify it as a Catholic sign of devotion to Mary. The word ‘scapular’ is a Latin word meaning shoulder blade.

A scapular is sacramental

According to the Catechism of the Catholic Church, a scapular is classified as sacramental. A sacramental is a sacred sign instituted by the Church for sanctification. Scapulars, like rosaries, holy medals, and crucifixes, are sacramentals. Sacramentals point to a way that leads to Christ.

How did the Scapular Tradition Start?

According to the tradition, Our Lady appeared to Saint Simon Stock on July 16, 1251. Simon, a Superior General of the Carmelites, was praying for his Order during an intense situation. During the prayer, Mother Mary appeared to him, surrounded by angels and gave him the scapular. It is said that Mary told Simon: Receive, my beloved son, this habit of thy Order… whosoever dies clothed in this shall never suffer eternal fire.

How did the religious habit for Carmelites become a small scapular?

Historically, a scapular was a long piece of cloth that went over one’s head and hung down in front and at the back. It was usually worn by monks over their shoulders. Even today, some religious priests wear a brown-colored habit as their religious attire, like the Carmelites. So, the scapular given to Saint Simon Stock was not a little piece of cloth. It was a religious habit. The devotion was adapted to the lay faithful by designing a smaller piece of clothing (usually with a two-piece of fabric connected by a cord or a ribbon) to be worn around the neck that hangs down one’s front and back.

Who can wear a scapular?

Any Catholic can wear the scapular. You can also be part of a scapular investment ceremony, which the priest performs. Informally, a priest can bless the scapular with a sign of the cross, saying a prayer and sprinkling holy water on the candidate and the scapular. Yes, even children can wear it.

It is said that Pope John Paul II refused to take it off during a surgery that followed the assassination attempt in 1981. If you find no priest to bless it, you can get it blessed by an elder in the house or a family. After that, you can continue wearing it faithfully and keep the spiritual commitment it mandates.

When a blessed scapular is no longer in use or is worn out, and you intend to dispose off such scapular, treat it like any holy object. You can either burn or bury it. Don’t dump it in the wastebasket.

What is a Scapular NOT?

A scapular is not a magic wand to keep you safe and save you from the fires of hell or eternal damnation. One cannot expect the scapular to fulfill its purpose by simply wearing it but continuing to live a sinful life. A scapular is an external sign of a filial relationship between the Blessed Virgin Mary and the faithful who entrust themselves to her protection.

A scapular is not necessary for salvation. But it is a powerful sign, an amazing gift of blessed Mother Mary. When one wears it in faith, it will lead the person to experience holiness and protection from eternal damnation. It does not mean that God will absolve you of sinful behaviors by wearing the scapular.

One can wear a scapular to express fidelity. But the primary intention will always remain to show love to Mary and commitment to Christ. Wearing a scapular prepares you to receive grace and helps to grow in holiness. It is not enough to be found wearing a scapular at the moment of your death. One should be in a state of grace at the time of death to receive eternal reward.

Scapular may look weird to people of other faiths or to even free-spirited Christians. But wearing a scapular is the Catholic thing to do. It can renew the baptismal promise that we have put on Christ and stay tuned to Christ every moment of our life.

Are you wearing a scapular?

What’s the impact of a scapular on your spiritual life?

I want to hear from you in the comments section below.

Related Posts
Sacred Heart of Jesus: Things You Take for Granted
Is Your Parish Flourishing? 11 things to know
11 Things Churches Do that Drive Away Visitors