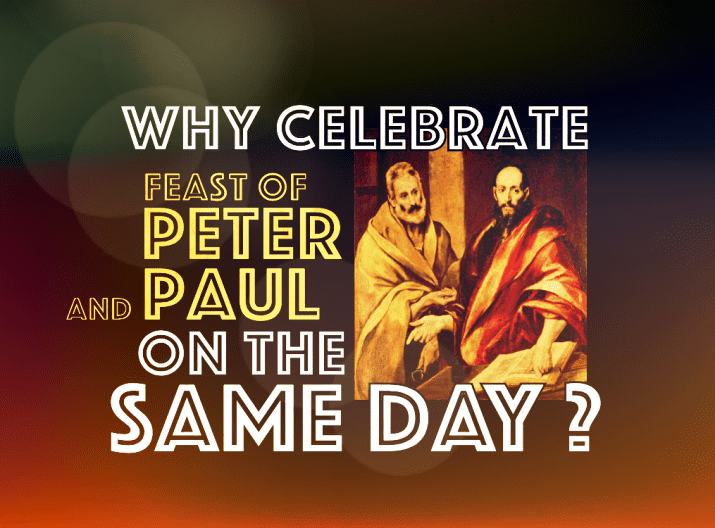 The curious mind wants to know why the two saints share the same feast day. A popular gossip is that they both fought for faith, even disagreed with one another on issues, and used different methods of evangelization. So, the church decided to keep them together for eternity, as their friction favor the spread of the faith in Jesus. But is this true?

The day is a solemnity – a feast day of the highest rank. This honor is reserved for only the most important events, like events in the lives of Jesus and Mary. Therefore, this emphasis shows how vital the two saints are to the Catholic faith.

What happens in Rome on June 29?

It’s a major Roman holiday. Roman Schools, banks, and stores are closed as the city celebrates religious and secular events. The Vatican is closed on June 29. Pope holds a mass and gives pallium,  a special vestment worn over the shoulder, to archbishops appointed in the past year.

St. Peter was one of the twelve apostles of Jesus, as well as the first pope. He was martyred sometime around AD 64. Since he was not a Roman citizen, he was crucified. According to tradition, Peter requested to be crucified upside-down because he did not consider himself worthy to die in the same way as Jesus. So when emperor Constantine converted to Christianity, he built a church above Peter’s grave. That’s what we know as St. Peter’s Basilica in Vatican City.

St. Paul has an interesting story. He also was an apostle, responsible for much of the New Testament. Although he never met Jesus, Paul is acclaimed as an essential apostle to spread nascent Christianity. Paul was martyred as well. But since he was a Roman citizen, his death was through beheading in AD 67, more lenient than crucifixion.

There is evidence that the church celebrated the feast of both saints as early as AD 258 on the same day. St. Augustine of Hippo’s sermon in the year 395 states: Both apostles share the same feast day, for these two were one; and even though they suffered on different days, they were as one. Peter went first, and Paul followed. As so, we celebrate this day made holy for us by the apostles’ blood. Let us embrace what they believed, their life, their labors, their sufferings, their preaching, and their confession of faith.

The gossip mentioned above may not be an accurate fact. But tradition held the saints together with a mysterious design; now, some may call it the plan of God. Both saints offer important leadership lessons being true to the inspiration of the Holy Spirit, even if need be opposing the other’s point of view. It does not compromise to forges the faith ahead. When you find yourself challenged for your ideas, try discernment – openness to the fresh outpouring of the Spirit.

Related Posts
John the Baptist Offers Alternative Narrative for Today
Bizarre Things about St. Anthony of Padua
7 New Invocations to Litany of St. Joseph. What Does It Mean?