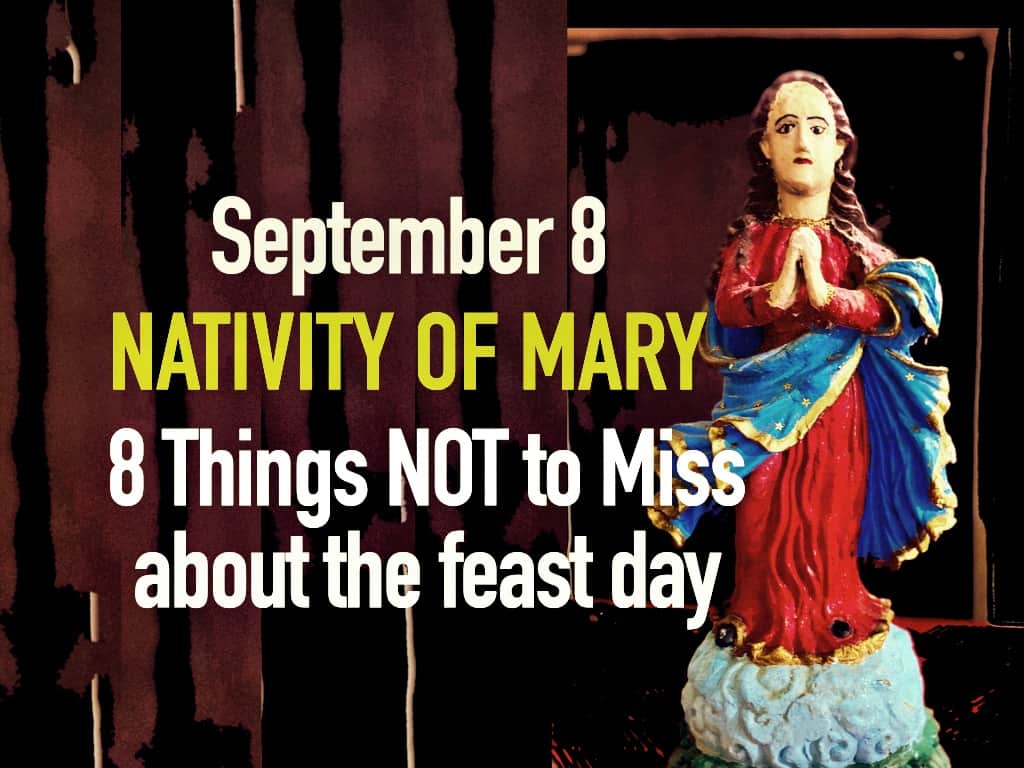 What do you miss about the September 8 feast of the Nativity of the Blessed Virgin Mary? Yes, there is a nine-day preparation period for the celebration of the feast.  People of other faiths call this feast – “a feast of flowers,” especially children who offer flowers as a sign of veneration. In some parts of the world, children dress as angels and sing songs to the Blessed Virgin Mary, as they offer flowers or drop flower petals at the feet of Mary.

The Church celebrates Mary’s birth from the sixth century onwards. But what is the exact day Mary was born? We don’t know the birthday of Mary with 100% precision. The Eastern Church selected a September date because it begins its Church year with September. September 8 helped to determine the date for the feast of the Immaculate Conception on December 8. So, September 8 is not the actual birth date of Mary but chosen for veneration.

2. When was Blessed Virgin Mary born?

Mary was a 1st Century Galilean Jewish woman of Nazareth, the wife of Joseph. According to the Gospels, Mary was the virgin mother of Jesus. Mary was born probably in 18 BC and must have died after 33 AD. The consensus is that September 8 was chosen to celebrate the nativity of Mary since the civil year began in Constantinople on September 1.

3. Does the Scripture give an account of the Blessed Virgin Mary’s Birth?

The Bible does not provide any details about Mary’s birth. We find reference in the apocryphal writing of James. The work of James may not have historical value. But these writings reflect the development of Christian piety. James indicates that the parents of Mary were an elderly couple – Anna and Joachim who were infertile and yet were promised a child who will advance God’s plan of salvation. These stories communicate the salvific intervention of God in Mary’s birth.

4. Who were the parents of the Blessed Virgin Mary?

Yes, you know their name. According to apocryphal writings, Saints Anne and Joachim were parents of the Virgin Mary.  But you want to know what they did for a living and their pain and faith experience. The early second-century writings describe Joachim as a wealthy member of one of the Twelve Tribes of Israel. But Joachim along with Anna grieved their childlessness and devoted themselves to rigorous prayer and fasting. They wondered whether the inability to conceive a child might signify God’s displeasure with them.

5. Do we know anything about the Blessed Virgin Mary’s Infancy?

We do not know much about how Mary grew as a child. She may be like a typical Jewish religious girl. But the writings note that Anne made a sanctuary in the infant’s room and allowed nothing common or unclean on account of the special holiness of the child. The document records that when Mary was one year old, Joachim “made a great feast and invited the priests, the scribes and the elders and all the people of Israel.”

6. How old was the Blessed Virgin Mary when she had Jesus?

Jesus was the first child of Mary.  And Joseph, Jesus’ father, would not have been much older than his mother. The age of Mary at the time of Jesus’ birth would be between fourteen and twenty.

The Church has a tradition of celebrating the birthday of important persons. Mary’s birthday is one among the three that is enlisted there in the Church’s Calendar – the birthday of Jesus (December 25), the birth of John the Baptist (June 24), and the Birthday of Mary (September 8). Although all three were born without original sin, Jesus and Mary were born conceived without sin. St. John was cleansed of the sin while in the womb at the visitation of Mary.

8. Things to Do on September 8

Attending a Mass is the best you can do. But given the global pandemic, there are restrictions for in-person gathering in the church setting. Apart from your daily rosary devotion, you can learn prayers to Mary, such as the Angelus, Litany of Loreto, Memorare, Hail Mary, and Hail Holy Queen. Yes, you can sing hymns to Mary such as Salve Regina, Immaculate Mary, Hail Holy Queen. Decorate your family altar with flowers or with a unique Marian décor.

Birthday celebrations bring happiness. And the birthday of the Blessed Virgin Mary is a time for joy, praise, and hope. The theme of joy is pervading the feast day liturgy. The feast renews a faith, our sanctity, and hope in God’s intervention in our life.

Related Posts
Why Do Catholics Wear Scapulars?
Ways of Dispose of Sacred Objects
Litany of Supplication: Why Pray It More Often?