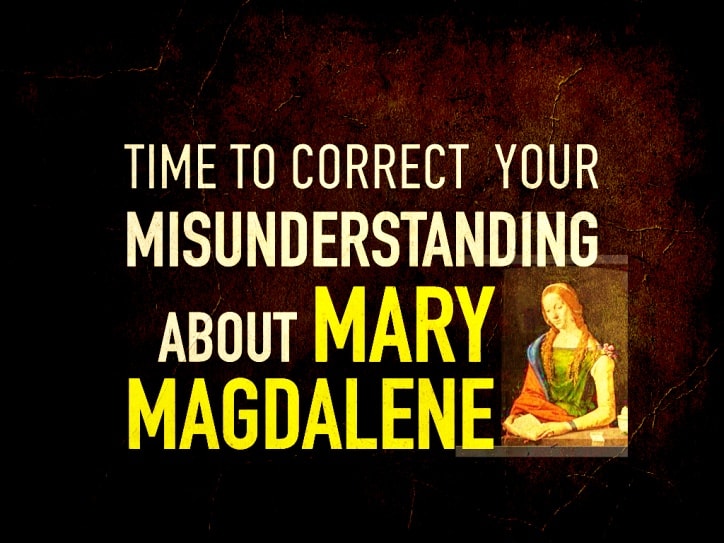 The real Mary Magdalene remains a subject of confusion, controversy, and bias. It’s confusing because fiction writers portray Mary Magdalen as Jesus’ wife, prostitute, or a sinner woman. But that’s not true even if the popular notion of Mary of Magdala is a penitent prostitute.

Who is Mary Magdalene?

What does the Bible (NOT) say about Mary Magdalene?

All four canonical Gospels (Matthew, Mark, Luke, and John) note the presence of Mary Magdalene at the scene of crucifixion and mentions her to witness the resurrection of Jesus. After the male disciples fled from the scene, Mary Magdalene played a crucial role in spreading the story of Jesus’ resurrection. She visited Jesus’ tomb on Easter Sunday, either alone (according to John) or with other women and found the tomb empty. Jesus actually appears to Mary Magdalene after his resurrection and instructs her to convey the news to the other disciples (John 20:1-13). Only Gospel writer Luke discusses her role during Jesus’ ministry, listing her among “some women who had been healed of evil spirit and infirmities” (Luke 8:1-3).

How did the misinterpretation and damage happen?

Jesus had many women disciples, but the mention of a woman’s name was a big deal in the cultural setup of that time. Jesus was empowering women disciples as never seen before. The male-dominated society felt uncomfortable with the prominence given to women. The patriarch leaders concocted a story without biblical backing to discredit her. The story was something like this: Mary Magdalene was a prostitute who repented and was saved by Jesus. The objective was to damage her leadership role among the followers of Jesus.

As a result, Western writers tried to reduce the influence of Mary Magdalene by portraying her as a sinner and, more precisely, as a prostitute. And so, fiction writers kept adding attention-grabbing details to the Mary Magdalene prostitute-wife story. But from the early centuries onwards, the Eastern church honored Mary Magdalene as the apostle to the apostles.

There is no connection between demonic possession and prostitution.

In 591 AD, Pope Gregory the Great distinguished between the sinner woman and Mary, from whom Jesus cast out seven demons.  In a way, it reinforced the misunderstanding that Mary Magdalene was a repentant prostitute. Although there is no canonical backing for the connection, it fuelled popular imagination for centuries.

Given the incorrect interpretation, the church started “Magdalene Houses” to shelter “fallen women” as a result of prostitution or as a safe haven for women who conceived out of wedlock across Europe. Misinformation happened. It was time to correct it.

How the Catholic Church corrected the misunderstanding of Mary Magdalene?

The Catholic church changed the feast day Gospel reading from Luke’s sinner woman to John’s women who witness the resurrection and went forth to proclaim the good news to the other disciples. Pope Paul VI made a significant change in correcting the understanding of Mary Magdalene and bestowing the honor due to a saint. It may have taken 1400 odd years for the truth to triumph. Mary Magdalene, like her master Jesus, was misunderstood and victimized.

Mary Magdalene is mentioned 14 times in the Gospels, and her name is always mentioned first when noted along with other women.  No woman supersedes Mary in her devotion to her master – she did not deny the master, did not flee like the male disciples, stood at the foot of the cross and was the first to go to the tomb on Easter Sunday.

Despite all these references in the Scripture, Western literature and art portray her as a sinner woman – a repentant prostitute. No one can stop fiction writers from adding salacious details to the Jesus and Mary Magdalene story.

Whatever was said and done, Mary Magdalene was a simple woman who managed to find spiritual strength in Jesus and lead others to the risen Christ.

Related Posts
Why Do Catholics Wear Scapulars?
How to ENGAGE 82% Lukewarm Parishioners?
Sacred Heart of Jesus: Things You Take for Granted