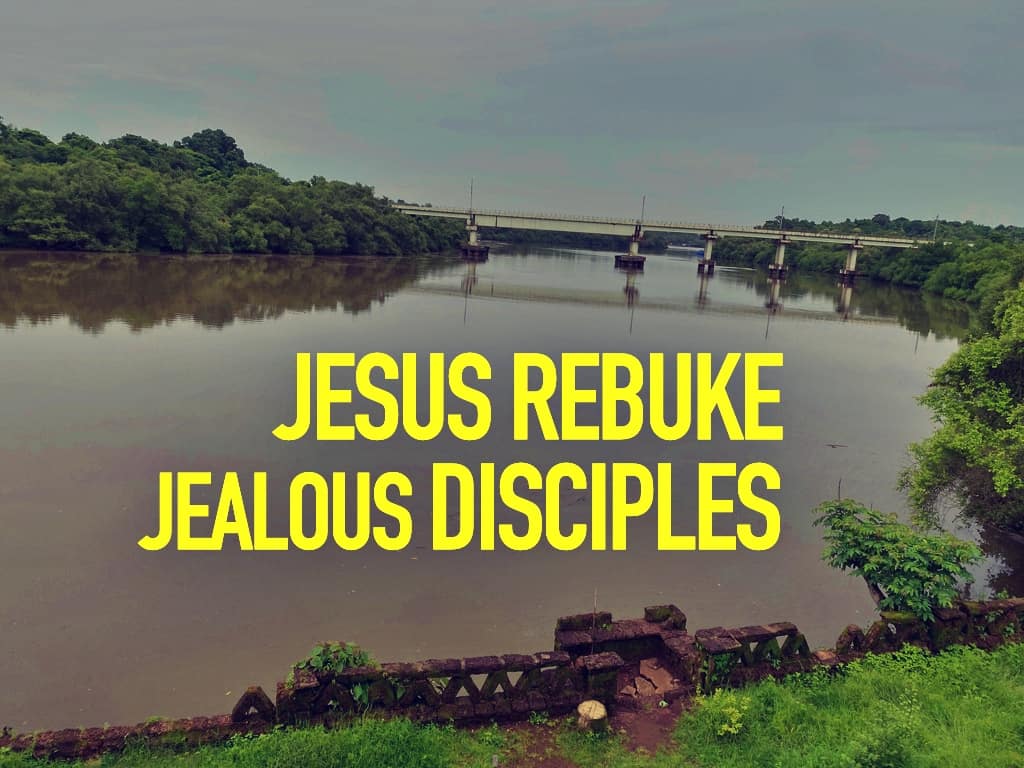 Jesus rebukes jealous disciples to teach them the proper way to follow him. The disciples are disappointed when Jesus says, “the last will be first, and if you want to be first, then you must be a servant of all.” It hurts their ambition. Another thing, because the disciples are close to Jesus, they should not cause the little ones to stumble. The disciples are creating a divide, questioning as to who is with us and who is against us. And Jesus points out that whoever is not against us is on our side. That’s what we read in Mark 9:38-50.

John, along with Peter and James, is privileged to be with Jesus on important occasions—such as the healing of the daughter of the synagogue ruler (5:37), at the transfiguration (9:2), and at Gethsemane (14:22). Jesus rebukes them. Jesus scolded Peter when he foretold his death, saying: get behind me, Satan. Jesus rebuked James and John, who were involved in their personal ambitions when Jesus predicted his death for the second time. Now, John makes the mistake of forbidding the exorcist who is not following “us”—the disciples and Jesus rebukes him.

What is John’s frustration?

The disciples tried but failed to stop the man casting out demons. A part of the disciple’s frustration is the earlier failure to perform an exorcism. The certified disciples failed to stop the uncertified but successful exorcist who is using the name of Jesus. The disciples felt that the exorcist was using Jesus’ name without authorization. John’s concern is not preserving Jesus’ name. It is more of protecting the disciples’ unique status. Jesus commissioned the twelve- so they should do the things, not the unauthorized one doing good works.

Why does Jesus avoid forbidding the unauthorized exorcist?

Jesus said, ‘Don’t forbid him, for there is no one who will do mighty work in my name, and quickly be able to speak evil of me. For whoever is not against us is on our side.’ (Mark 9:39-40). The disciples drew a circle and kept the exorcist out. Jesus re-draws the circle to include him. Jesus—touched a leper, ate with tax collectors and sinners, and even took little children into his arms— thus drawing a wider circle. The disciples would still prevent the little children from coming to Jesus (Mark 10:13-16).

The exorcist is not the enemy, like the scribes and Pharisees. The exorcist is keeping Jesus’s concern of driving out demons. The effect of the work is beneficial, and it is done in Jesus’ name. He may not have met the authentic discipleship standard but Jesus shows sympathy for his work and encourages the disciples to do the same.

What did Moses tell Joshua about Eldad and Medad?

In the Old Testament, Moses appointed seventy elders, whom God gave the gift of prophecy. Eldad and Medad were not among the seventy, yet prophesied. And Joshua complained to Moses to stop Eldad and Medad. But Moses replied: “Are you jealous for my sake? I wish that all Yahweh’s people were prophets, that Yahweh would put his Spirit on them!” (Numbers 11:29).

People fall into the trap of excluding others

People fall into the trap of excluding others because they are not in the Church community. Jesus was inclusive. Some people think others who are not on their side are inferior. Jesus calls to set aside petty jealousies and respect the gifts of those who work in Jesus’ name.