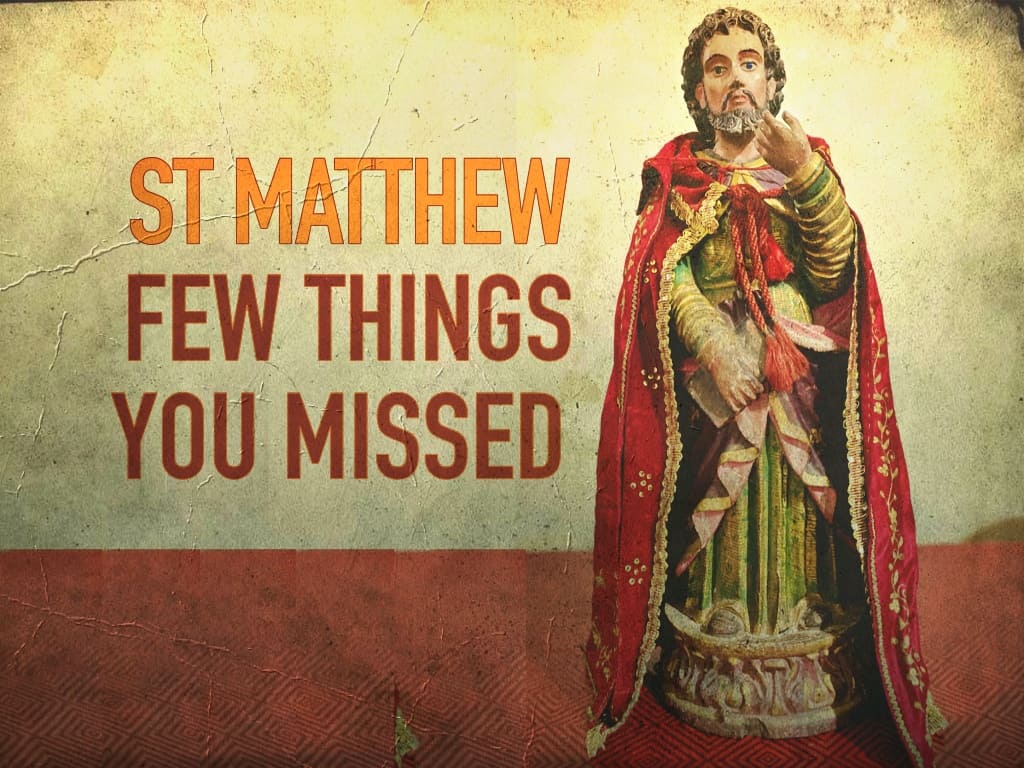 You know about a tax collector who became an apostle of Jesus and is now known as St. Matthew. You know that St. Matthew wrote one of the four Gospels. There is more to learn about how the most hated man among the Hebrew community became a faith leader connecting the Jewish messianic expectations to Jesus. Although we don’t know much about the early life of Matthew, I hope you will find something of interest here below.

St. Matthew was the son of Alpheus, likely born in Galilee. His original name, before he became a disciple of Jesus, was Levi.  Levi became Matthew – a name change just as Simon was called Peter. Matthew in Hebrew means “Gift of Yahweh.”

According to the Gospel, Matthew worked at a tax collection booth in Capernaum. He collected taxes for Herod Antipas, the then governor of Galilee in the Roman Empire. In the era of Jesus, the Jews hated the profession of a tax collector. Although Matthew was a Jew, he was hated publicly by the Hebrew community. Collecting tax itself is enough reason to hate him. But the Hebrew people were paying taxes to the Roman Empire. Matthew was not just collecting taxes; he was a Jewish agent of the Romans.

What happened when Jesus called Matthew?

It looks trivial – Jesus walked to Levi and said, “Come follow me.” And he left everything and followed him. Matthew became a disciple. Was it so easy as pictured above? The Hebrew people distrusted Jewish people who worked for the Roman Empire. These Jews were seen as greedy, selfish, and traitors. There are accounts that the Hebrews would not allow Jewish tax collectors to marry Jewish women or even worship in the synagogue. Jesus’ call of Matthew reversed all the hatred into love – a story of acceptance of a perceived traitor.

The confusion Matthew creates in the Jewish minds.

Matthew left everything and followed Jesus. Matthew paid back those he cheated, renounced worldly possessions, and committed himself to follow the new teacher. There were repercussions.  The Jewish community did not trust him immediately.

Pharisees and Scribes criticized Jesus for eating with a sinner and tax collector. But Jesus calling Matthew is a sign of God’s forgiveness.

The leaders were already suspicious of Jesus for engaging with the lowest in the Jewish society. Now the new addition to Jesus’s core group was the one hated and distrusted in the community.  Matthew offered a feast after Jesus called him. And the Pharisees and Scribes criticized Jesus for eating with a sinner and tax collector. But Jesus’ call to Matthew is a sign of God’s forgiveness.

Matthew is the author of the first book in the New Testament.

The Gospel, according to Matthew, is believed to be authored by Matthew – one among the twelve apostles of Jesus. It is from Matthew we know about Jesus as Christ or Messiah. Matthew wrote the book in Aramaic around 41-50 AD, much after the death of Jesus. He hoped that his account would convince his fellow people that Jesus was the Messiah and his kingdom was fulfilled spiritually. The account was contrary to the popular Jewish expectation of the return of a militant Messiah to overthrow the Romans.

What is unique about St Matthew’s Gospel?

Matthew wrote for a Jewish Christian audience living within the proximity of Jerusalem. The community was encountering tensions after the first revolt. The book does not contain the name of Matthew. A superscription “according to Matthew” was added in the second century. The Gospel, according to Matthew is offering a Jewish perspective. He quotes mostly from the Old Testament as compared to the other Gospel writers.  There are more references to the Torah present in Jesus’ teaching. The book contains 130 Old Testaments quotes and allusions.

How did St. Matthew die?

There is no historical record on Matthew’s death. It is not known how St. Matthew died, whether his death was natural or as a martyr. According to the legends, Matthew fled to Ethiopia to escape persecution after 42 AD.

What is Matthew’s Symbol?

O Glorious St. Matthew, in your Gospel, you portray Jesus as the longed-for Messiah who fulfilled the Prophets of the Old Covenant and as the new Lawgiver who founded a Church of the New Covenant.

Obtain for us the grace to see Jesus living in his Church and to follow his teachings in our lives on earth so that we may live forever with Him in heaven.

St. Matthew is a patron saint of Bankers.

Since Matthew was a tax collector, he is a patron saint of tax collectors and bankers. The Church established St. Matthew’s feast day as September 21.

The Final Words on St. Matthew

Matthew’s focus was not on the life and personality of Jesus but on the preaching of Jesus by which Jesus interpreted the Law of Moses in a new way. It is Matthew who first introduced Jesus as a Messiah. Matthew repeatedly uses two phrases no other Gospel uses: the “Kingdom of God” and the “Kingdom of Heaven” almost 32 times in the whole bible, and all of it is in Matthew.  Matthew links Jesus to the Old Testament. I am sure learning about St. Matthew will guide you to discover the connection – an alignment with God.

Related Posts
Ways of Dispose of Sacred Objects
Sacred Heart of Jesus: Things You Take for Granted
Litany of Supplication: Why Pray It More Often?