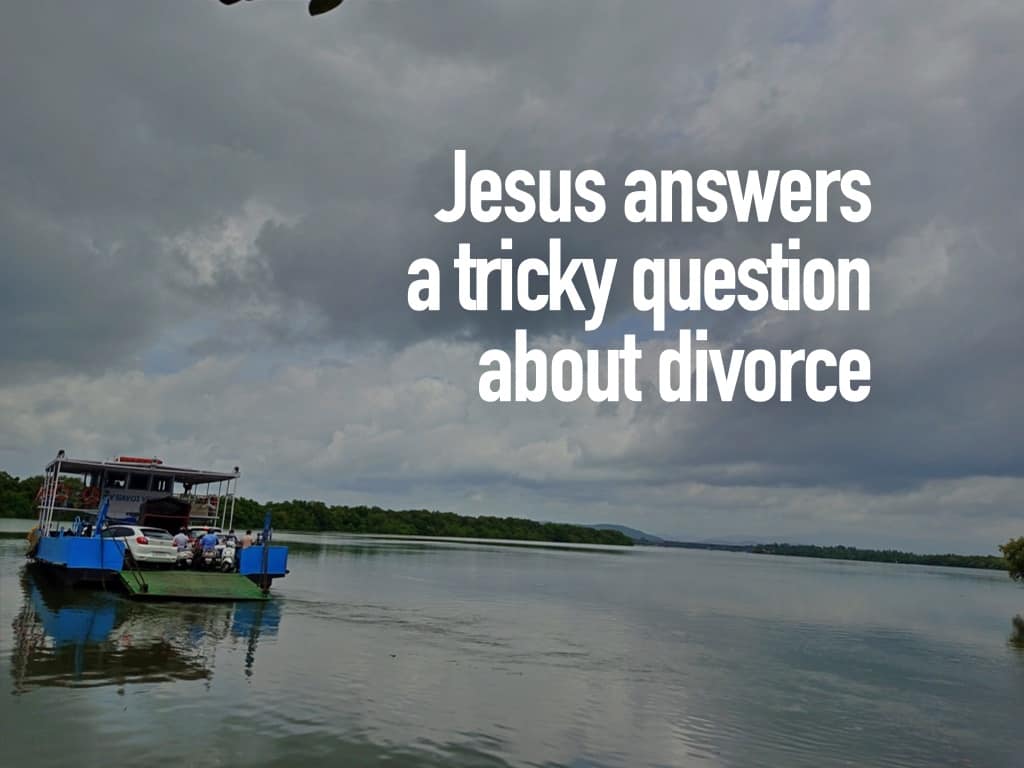 Why did the Pharisees ask Jesus the question on divorce?

The Pharisees came to test Jesus and asked him, “Is it lawful for a man to divorce his wife?” But why choose the topic of divorce? It’s important to focus on the location – borders of Judea, beyond Jordan. The location is the territory of Herod Antipas. Antipas divorced his wife and married Herodias, the wife of his brother Philip. John the Baptist criticized their marriage, which led to his beheading (Mark 6:18-29).

The Pharisees knew that Jesus could get into trouble by condemning divorce. And hence Antipas and Herodias might kill Jesus. The motive of the Pharisees was to get rid of the troublesome presence of Jesus. But Mark has told us that Antipas is aware of Jesus, and he believes that Jesus is John the Baptist raised from the dead.

What is the difference between God’s testing and Pharisees seeking to test Jesus?

The word used is more like tempting Jesus, like Satan tempting Jesus in the wilderness. But God also tests people in the Bible.  The difference is that God hopes that the person will pass the test. In contrast, the Pharisees were hoping that Jesus would fail the test and eventually get killed by Herod Antipas.

What is the tricky question?

The Pharisees ask Jesus: “Is it lawful for a man to divorce his wife?” But Jesus replied with another question: “What did Moses command you?”  The Pharisees are quick to respond, “Moses allowed a certificate of divorce to be written, and to divorce her.”

Understand the context. The Pharisees hope that Jesus takes one side of the controversy about divorce. There are two groups.  Shammai School said that a man could divorce his wife if she commits adultery. But Hillel School says a man can divorce his wife for any fault he might find in here – divorce for even trivial reasons.

Only men are allowed to divorce their wives, not vice-versa. In Jesus’ time, women were treated as husband’s property and had few legal rights. The consequences for a divorced woman were devastating.

Which passage do the Pharisees misquote from the Bible?

The Pharisees are quoting Deuteronomy 24:1-4. The passage does not grant a man permission to divorce his wife. But it describes a situation that the man has already done. The emphasis of the text is to prohibit the husband from re-marrying his ex-wife, who has already married another man.

Why does Jesus’ response stun the Pharisees?

Jesus does not declare the passage invalid.  Jesus said, “For your hardness of heart, Moses wrote you this commandment.” Even if the Torah law permits something, that does not imply that  God approves of it. The hardness of heart is at the heart of the debate.

Jesus moves the discussion from Deuteronomy to Genesis – from Moses to God., from divorce to marriage – from what is permitted to what is intended.  Jesus says: “But from the beginning of creation, God made them male and female.” Jesus expresses God’s original intention of man and woman becoming one flesh. And therefore, Jesus concludes, “What therefore God has joined together, let no man separate.” No one is authorized to disrupt that Godly union. The hardness of the heart is still a fact of life just as in Jesus’ days and continues to be one today.

Why did Jesus’ response shock the disciples?

The disciples are worried as Jesus’ divorce policy moves away from the prevailing culture. It has implications even for the disciples.  Because Jesus said: “Whoever divorces his wife and marries another commits adultery against her.” It was a shocking statement in a patriarchal culture that did not acknowledge adultery as an offense against women. Even the law did not permit wives to divorce their husbands. But Herodias divorced her husband to marry Herod Antipas. It indicated that in exceptional situations, certain women were allowed to divorce their husbands.

What is the connection between divorced women and little children?

And now Jesus affirms it by saying, “Most certainly I tell you, whoever will not receive the Kingdom of God like a little child, he will in no way enter into it” (Mark 19:14-15).

Related Posts
Where does evil come from? Jesus’ Answer
Why did Jesus call Peter “Satan”? Did Peter Tempt Jesus?